The Good, The Bad, The Ugly and New 1 Day Wildlife Photography Workshops

Before I get started this blog is not about the cape wearing Clint Eastwood spaghetti western, it is about wildlife photography, trust me!

The Ugly – A few years ago we used to have two collared doves in our garden. They used to sit on the telephone wire cooing, sitting next to, and cuddling, each other. That was until last year when Mr or Mrs sparrowhawk decided it wanted to eat one of them. All we found was a pile of feathers, a beak and a foot near a bush in the garden. The other dove stayed around the garden and in early spring of this year was joined by a partner. Things were getting on great with each other so they made a nest together in one of our trees and had two siblings. They grew up and we often saw all four of them sitting on the telephone wire with the juveniles demanding food or some other sort of attention. A couple of weeks ago we found another pile of feathers and a beak and one of the juveniles had become breakfast for Mr or Mrs sparrowhawk. The three doves seemed a bit nervous over the next few days and who can blame them! Then at the start of this week I found yet another pile of feathers just after coming back from taking Murphy for his first walk of the day. I don’t know which dove had been killed as I have not seen any of the others since. It’s really sad because they are such beautiful birds but I have always said that if you provide food for birds and encourage them to your garden you are only laying the table for a sparrowhawk.

The Bad – The other day I went out to photograph the red deer on Exmoor. I’ve run a few Red Deer Rut photography workshops this year and I wanted to take some images for myself. When I run a Red Deer Rut photography workshop I do not take my own camera equipment because I feel it is your day to take photographs and not mine. When I do my own photography I do not just want to photograph the red deer stags as the way I look at it, it takes two to tango and I am a wildlife photographer, and I want the whole occasion so I photograph the stags, hinds and the fawns or calf’s or kids depending on what you call them. I heard the presenters on Springwatch / Autumnwatch call them fawns one minute and then calf's the next! After a two hour drive to Exmoor, arriving at 7am, I was not pleased with the weather. It was thick fog, very windy and raining heavily. I don’t mind rain as it masks your scent and deadens any noise you make but I won’t find deer in thick fog and the deer are easily spooked when it is very windy. Still I was there and I was not going to give up, forever the optimist! I got dressed in my wet weather gear, collected my camera equipment and placed it in my backpack and set off. During the day the rain lessened and the fog thinned slightly but the strong wind remained. All day long I walked up hill and down dale all to no avail as the deer were very skittish and were running away even when I was hundreds of metres away from them. It was made even harder because I could not get downwind from the deer as the wind direction kept on changing. At the end of the day, about 4pm, I had to walk back to my car and due to exhaustion I was really struggling getting up the hill even though it was along the road. I was saved when a kind gent stopped in his Landrover Freelander and asked if I wanted a lift up the hill, which I enthusiastically, as much as I could, accepted. So I ended up back at my car, soaking wet inside and out, cold and absolutely knackered all to no avail because I hadn’t taken one photo, in fact I hadn’t even taken my camera out of my backpack! It’s all within the trials and tribulations of being a wildlife photographer.

The Good – A couple of days later I was back up to Exmoor for another try and this time the weather at 7am was broken cloud with sun/blue sky in between with hardly any wind. What wind there was, was bitterly cold but that didn’t bother me as walking would keep me warm and I could always put on more clothes when I stopped walking. I parked in the same place and set off downhill. After about ten minutes I saw a group of six golden plover circle me and land in amongst the bracken about a hundred metres away. I’ve seen groups of up to two hundred of these beautiful birds on Dartmoor but never got close to photograph them because the area where they landed on and stayed was so open. Just before they landed I dropped to the ground to reduce my height. I then slowly reduced the legs of my tripod to their minimum and over the next hour or so I crawled towards them ending up about fifteen metres away just peering through some of the bracken. I had angled myself downwind from them which meant that they were backlit. Some things to be aware with backlit subjects is 1, watch out from over burning the rim of the subject and 2, you have to slightly over expose the subject because otherwise you end up with a black blob as the subject. Use your histogram and adjust your exposure accordingly to get it right in camera. If you lighten the dark area in your RAW software all you do is introduce artefacts like digital noise to your image.

I slowly set up my camera and started taking images. One huge downside of using the high speed, 12 frames per second, motordrive on the Canon 1dx mk 1, like most DSLR’s, is that the mirror slaps sounds like a machine gun going off each time I press the shutter release and this alerts wildlife and they stop doing what they are doing to look at the direction of where the sound is coming from or they make off away from you. In other words it disturbs them and I hate disturbing wildlife especially just for a photograph. At this time of year there is a lot of migration going on and this might be the only food the birds could eat before moving on. This food or extra food could be the difference between life and death for them. This is one huge plus point with mirrorless cameras as they are silent when you press the shutter release and you can take images with the camera very close to wildlife without disturbing it. As I was so close to the golden plovers I changed the settings on my camera to shoot at a low motordrive speed of two frames per second rather than twelve. Doing this reduces the noise significantly and didn’t seem to disturb the plovers. The 1dx has a silent mode and it is a very quiet mode but the downside is that it only shoots a single frame each time you press the shutter release. This is not very good for wildlife photography because the wildlife can do any amount things when you take the image which you do not want to photograph like move its head for instance.

For the next couple of hours I immersed myself with taking different images of the golden plovers including landscape images and portrait images. I started with non-action images before I moved onto action images of them eating and stretching their legs and wings. I waited until they did something before I pressed the shutter release. During this time the sun was moving round so I was getting more and more of the birds in good sunlight and therefore I had to reduce my exposure. The birds were moving closer to me, some less than 10 metres away, which I didn’t particularly want as a single bird was nearly filling the frame. They were so relaxed a couple of them had even closed their eyes and were going to sleep which made me feel really good inside because it showed that they were comfortable with my presence. 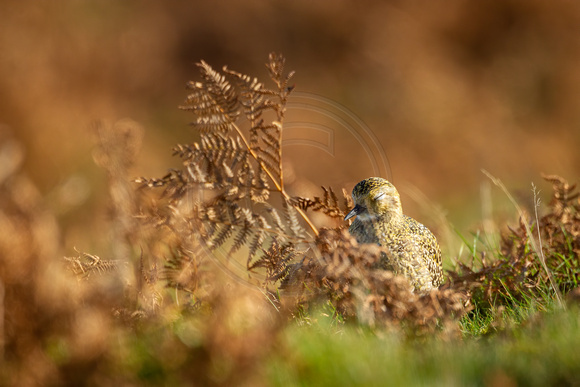 During a slight break from shooting I noticed that about 12 red deer, hinds and fawns, had walked up the hill towards me and had settled down on a bank in the sunshine and out of the wind about 80 metres away from me. I was reluctant to leave the plovers to photograph the deer because I wanted a shot of a plover with an open beak. Half an hour later I got the shot I wanted, but I still stayed in position because I did not want to disturb the birds. I led back, closed my eyes and whilst the sun was warming me I listened to the red deer roaring, the golden plovers squawking and meadow pipits squeaking. More golden plovers flew overhead and all of a sudden the few beside me flew up to meet them. This was my queue to exit the scene and move closer to the hinds and fawns.

I crawled to within 30 metres of them, set up my camera and waited until they did something so I could get an action shot. After waiting over an hour I got fed up as they were doing nothing apart from eating and sleeping so I crawled away and when I was about 100 metres away from them I got up and carried on walking downhill. I looked back at the deer and although they saw me they weren’t too bothered as they stayed lying down.

Further downhill I located a red deer stag with several hinds, the herd was about 30 strong. I made my way closer to them, set up my camera and tripod behind a bush, so I remained in the shadow, and waited for them to get closer to me. 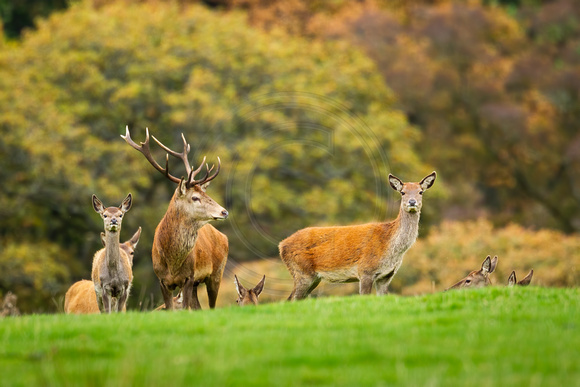 There are several ways to get closer to wildlife and setting myself up a distance away and waiting for the wildlife to approach me is my favourite because the wildlife does not seem perturbed in the images I take whilst doing this. Also if I keep; downwind from the wildlife, perfectly still and within shadow the wildlife is not disturbed. One big downside of this method is that you rely on the wildlife moving closer to you and sometimes this does not work. As it happened the herd did move closer to me and I took a few shots before they moved off in another direction. This change in direction was not down to me but down to other people, photographers, that were trying to get closer to the herd. When I packed up, because the deer were moving away, and moved and it startled the other photographers because they had not seen me “lurking” in the bushes, which brought a smile to my face.

As it was nearly 4pm I walked back to my car pleased with what I had seen during the day but I would have to wait until I’ve seen my images on my computer monitor before I would be pleased them as they look totally different on the cameras rear LCD.

If you choose to stay at our Holiday Cottage / B&B www.acorn-lodge-dartmoor.co.uk at the time of the workshop then you will receive a discount on your tuition and accommodation.