The other day, about half past nine at night, I was driving back home from the moor. I had been taking my dog out for his last walk before bedtime. The light was fading fast when I was passing a gated entrance to a field and I thought I noticed an Owl on the ground looking at me through the gate. I stopped quickly but silently to watch what appeared to be an owl and to see what it did. My dog was also watching the owl which was just staring at us. It looked like a Tawny owl but there was a patch of grass just in front of it so it was a bit difficult to make out properly. I was wondering if it had caught any prey and if it did what it was. After about twenty minutes I started to wonder if there was something wrong as the owl had not moved and it was getting darker. I made sure the car interior light was switched off and then opened the door, it did not move. I got out of the car which was about thirty meters away, it did not move. I walked towards it getting to twenty meters away, it did not move. I got about ten meters away, it did not move. I moved a bit closer and then realised that the "owl" was a brown paper bag! The bag was stood up with the bottom of the bag uppermost causing the illusion that it had ears and it had dark patches on the front giving the illusion of it having eyes. I smiled to myself thinking what an idiot. But it is amazing how many times your eyes deceive you into thinking you are seeing something when it is something else. A couple of months ago whilst sitting by the river Tamar in Devon waiting to photograph Otters I convinced myself that I could see an otter swimming in the river when it turned out to be a branch. On another occasion whilst sitting very low on the edge of a field waiting to photograph hares I thought I saw a Fox running through the long grass and was amazed when it took flight. It turned out to be a Kestrel. These illusions could be down to tiredness, the light conditions or just hoping to see a certain subject.

On Friday afternoon, as it was hot and sunny on Dartmoor I decided to take my dog out for a walk in an area by the river Dart where I was taking photos of Dippers earlier in the year. I had not revisited the area for a while so I wanted to see what was about. At this time of year the area is normally full of people on holiday and Friday was no exception. Due to the amount of people in the area when I arrived, I did not expect to see much wildlife but I was going to be proved wrong. As Murphy, my dog, was really excited, because he had not been here for a while, I decided to stay and have a look. The car park was full but most of the holiday makers were either inside the café or on their outside tables enjoying the drinks and food provided. As I was walking past people were coming out of the café walking to the tables. Why, when people do this, they seem to waft the food on their trays under your nose? Is it just me or does it happen to others, either way it did smell good. Passing through the gate to get on the moor was like passing into another world, the place was deserted. After I'd stepped out from under the trees I looked up and above me doing their dance were about a hundred House Martins. They are not as colourful as Swallows but just as acrobatic. They were swooping down skimming over the green bracken catching the flies that were disturbed by their presence before returning to the air. I stood and watched their aerobatics for a few minutes before continuing my walk. I went over by the river and immediately saw a Grey Wagtail flitting from boulder to boulder catching flies in between. 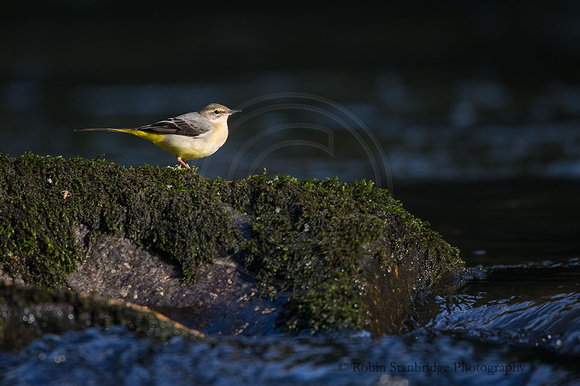 After Murphy had finished his “swim” I carried on walking deeper into the valley. A Robin was tick ticking its anger as I got closer to it before it flew off onto the next bush. 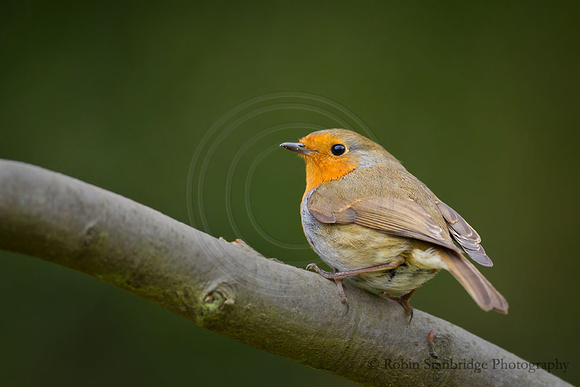 Upon landing it disturbed a Willow Warbler that was deep inside the bush making it move on top of the bush and easier for me to notice it. I walked past and although the Robin was still angry the Willow Warbler didn't seem to take much notice. 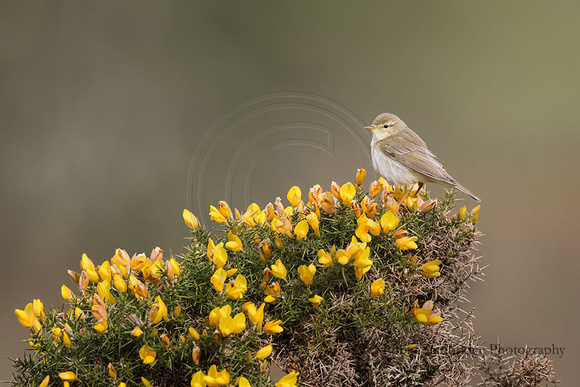 Stonechats were here and there on top of the gorse bushes sounding their alarm calls until I had walked past. The biggest thrill of the walk was waiting for me at the end of the valley. I noticed there were several birds perched under the trees, flying out catching flies and returning to their perch under the trees. I viewed them with my binoculars and they turned out to be Spotted Flycatchers, there were eight in all. I knew this area held Pied Flycatchers but spotted flycatchers was new to me. After viewing them for a few minutes I returned to my car really chuffed with my decision that I had carried on with my walk.

Due to the amount of work at work and at home I have not been able to get to my nature reserve for a couple of weeks. So on Saturday I decided to go there to see what's about. On my journey there I spotted a rather small female Sparrowhawk perched on a gate looking out over a field. When I say small it was about the size of an adult male sparrowhawk. It flew off just before my car drove past the gate. After entering my nature reserve I noticed a Roe deer about half way along the edge of the field next to the wood. I feel that roe deer are delicate and pretty compared to the big brash Red deer that we also get around here. It noticed me straight away but did not move. Roe deer have exceptional hearing and it takes a wildlife photographer with really good field craft skills to sneak up on one. Your other choice, my preferred method, to get close enough to it is to recon the area, see where they constantly attend, get there early and wait for them to come to you. I prefer this method because they seem less nervous in images or, it might just be me. I carried walking across the field, into the wood and down to the river Tavy. Because of the lack of rain and the amount of sunshine we have had in Dartmoor the river Tavy was very low, even in our deep pools. Next weekend I'll come down and cut the overhanging branches. I have wanted to do this job for a while but don't possess waders but the river is so low I can do it in wellies. I examined the little sand/mud bar we have on our side of the river and it was covered in Otter prints. There is a hole in the side of the river which goes back a couple of metres under some tree roots. My dog’s hackles always go up when he sniffs it. It is big enough for an otter to enter and I wonder if an otter uses it now and then just to get a kip. On the way back up through the wood I could smell where a fox had gone through and saw a Buzzard land on their usual perch on the big beech tree. I still don't understand Natural England giving licences to gamekeepers to shoot these wonderful birds of prey so they can keep Pheasants for them to shoot!!! I checked the Badger holes and all appeared ok so continued on to the top of the wood and noticed that the roe deer was still there watching me so I left the nature reserve as quietly as I could.

So another weekend goes by with no wildlife photography but I was happy because of viewing so much wildlife within the holiday period.

Craig MacInnes(non-registered)
Another nice update from Devon...I've never been but thanks to your blog I'm getting a "feel" for the areas you talk about, the river Tavy and Dartmoor itself - loved the bit about despite the cafe and picnic areas being full of visitors, as soon as you went on to the moor you had entered a different world, just yards away from the madding crowd. It never ceases to amaze me when that happens...the other week I took the RIB to the isle of May from Anstruther and before we left, Roy, the skipper, informed us that the isle would be particularly busy today as it was "family fun day" - my heart sank as I imagined all the wildlife would be scared away by hordes of screaming kids enjoying their "fun" activities...kicking myself for picking this day of all days I dreaded what was ahead...well, nothing could have been further from my gloomy imaginings than what I found when we got there. Sure there were tents up around the harbour and visitor centre with a number of the Rangers all done up in puffin costumes - face painting and sausages on the BBQ! But the families never moved from the tiny area set aside for the fun day!!! Result - I virtually had the cliffs and paths to myself and the seabirds and I was able to spend a good few hours relatively undisturbed just enjoying their antics...amazed me that nobody actually bothered to walk about 200 yards to any of the viewpoints! It's a bit like watching folks driving to the seaside and staying in their cars munching their ice creams...not even cracking open a window!
I think I was probably lucky as I'm sure a lot of photographers would have been put off going if they'd known in advance it was "family fun day" on the isle...I know I would have been!
No comments posted.
Loading...
Subscribe
RSS
Recent Posts
Tawney Owls, New Garden setup, Lockdown Rules, Landscape photo and Reptiles on Dartmoor Coronavirus Covid 19, Lockdown period, Keeping busy Wildlife Photography wise, Time, Talks, Trials of Photographing Cuckoos and Wildlife Photography Subjects for 2020 The Good, The Bad, The Ugly and New 1 Day Wildlife Photography Workshops New ventures in the Field of Photography and Touring some of Scotland's Western Islands Building a Garden Pond, New Computers, Extra bits you might need & Practicing What I Preach Excuses Excuses Excuses and starting Wildlife Photography in your garden Red Squirrels in England, Jays, a Selfish Hobby, a Dartmoor Landscape photography project Learning from Photographers, Jen Bryant, Mark Sisson, Fieldfare, Redwings & Red Squirrels Retirement, Our Nature Reserve, Red Deer and My Ways of Getting Closer to the Wildlife
Keywords
wildlife photography camera Dartmoor Devon wildlife photography photos images photograph birds
Archive
January February March April May June July August September October November December
© Robin Stanbridge Photography
User Agreement
Cancel
Continue