I was out early last Saturday morning with my camera back to the river Tavy on Dartmoor in Devon to get more photos of a Dipper. My wife dropped me off and was going to leave me there for about five hours. The weather was a bit cloudy but at least it was dry. I set up my camera equipment and settled down to do some flight shots of a dipper going back and forth feeding the young under the bridge. Within ten minutes the sky got very dark and it started to rain luckily I had waterproofs on and my camera and lens was protected with a waterproof cover. For the next hour and a half it rained. When I say it rained it was coming down so hard I could hardly see the other side of the riverbank at times. Because of osmosis the water went through my “waterproof” trousers and I was wet from my bum down. Luckily it was warm otherwise I would have been feeling really fed up.

About ten minutes after the rain stopped I spotted a Stoat on the opposite riverbank. It ran along the bank from my right to my left. It jumped over a couple of logs, into some thick grass and then ran straight up a tree. I watched it as it searched some of the branches looking for bird’s nests, a similar action to what happened on Springwatch. I know of a Greater Spotted Woodpeckers nest just the other side of the bridge but the stoat did not go near it. It came back down the tree and then went up another, again with no luck. Finally it ran back in the direction it came from. Throughout this viewing I tried to get a photo of it but two things stopped me. One it was so fast I could not locate it with the camera and two because it was still dark I could only manage 20th sec with an ISO of 6400. So no photo but it was a pleasure to watch this spectacle for real rather than on TV.

After the stoat had gone I sat there for another hour with still no show of the dipper. I was starting to worry about it thinking about it being predated or the young could have fledged. This is one of my, and lots of other wildlife photographers that work during the week, problem. I find some wildlife on one weekend and I have to leave it until the next weekend to find out what has happened during the week. I stopped worrying when the dipper appeared with a beak full of food for its young. But it did not stop; it flew straight past the bridge and went down river. I thought the juvenile dipper must be down river so I packed up and went for a walk along the riverbank. I say walk but it was more of a stumble really, stumbling from one wet mossy boulder to another praying that I didn't drop my camera equipment in the river. After a stumble of about half a mile the dipper flew past me going up river with a beak full of food! It looked as though I had been fooled by the dipper so I turned around and stumbled back up river. When I got to my original position I stopped to wait, see and listen. (The real reason was I was knackered, but don't tell anyone). Whilst listening I heard a very feint sound of the juvenile dipper just before it accepted food from the adult. So I gathered my equipment again and carried on walking up river. After about a hundred yards I located the juvenile dipper on a rock on the other side of the river. I set up my camera equipment to wait for the adult dipper. The location it had picked was like the inside of a cave, 20th sec f5.6 at ISO 6400, there was no chance I was going to stop any movement. The photo below is the best I could get, sorry. 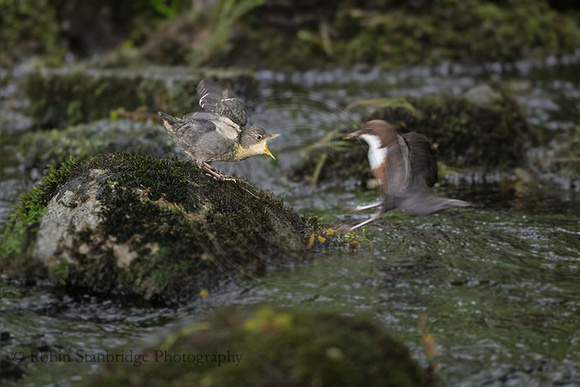 I took my tele converter off but even at f4 I could only get about 80th sec so I took lots of images of the juvenile dipper hoping I would get one sharp one, I have not looked yet. I don't hold much hope because dippers keep dipping all the time. The light never improved but I did reduce my ISO to 1600 but the exposure was nearly in seconds. Five hours had gone by quite slowly at first, when I was getting wet through with nothing to photograph, but time flew by when I had the dippers in my viewfinder.

This morning, Friday, I went out on the moor to walk my dog. I walked from the car park to the top of a Tor. On this walk there were a lot of juvenile Wheatears flying around which will mean I will be there this weekend with my camera to “hopefully” get some images of them.  When I was at the top of the Tor I was looking around and to the right there is what looks like a grazing field with about 80 boulders dotted around it. On top of nearly every boulder sat a Crow. I found this a bit odd as I know crows usually have one or two birds on guard duty but they were all on guard duty so something had to be up. It did not take me long to find the reason why. Mr Fox was trotting along without a care in the world with a crow in its mouth. I watched it until it went out of sight and Murphy, my dog, started jumping up because he wanted to get walking again. Once again there was no sight or sound of the Cuckoo, very disappointing.

After a day walking around an area with your camera equipment, or during the day, you sit down and take a rest. As you do the bird you were after lands on a bush / branch / tree right in front of you. You raise your camera and get the bird in your viewfinder and fire off a few frames. Now if you are like me this is the moment you're like a kid in a sweet shop, (or is it kid in Macdonalds nowadays?), with a big grin on your face. The trouble is that now is the time to slow down and think. Have I got the right ISO, f-stop, shutter speed etc., has any of the camera buttons / wheels been moved whilst I was walking around (I've moved the exposure compensation wheel several times). But you should also think about the composition of your image including the background and the foreground. Look through your viewfinder and examine the whole area to find if there is anything distracting in the image. After you take one photo quickly check the histogram to see if the exposure is correct. Once you have checked it all and taken several photos of the bird, move your position as it is amazing what a difference your position will make to the image. Move to a prone position, kneeling, standing, to the left or right will sometimes change the image completely. The two images below are of the same Willow warbler singing on the same bush and all I have done is stood up. Look at the difference it made. It is up to the individual which one he or she likes (if any). I know which one I prefer. Let me assure you that there is no Photoshop background changes here. Good hunting (with a camera). 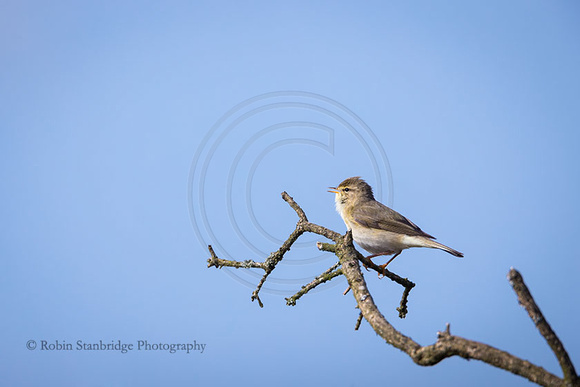 Craig MacInnes(non-registered)
Once again Robin you manage to entertain and inform in equal measure. You had me laughing at the back and forth chasing the dipper and sympathising when confessing being knackered. I'm trying to think more about the whole image now too instead of being oh my god there's an osprey! Quick fire off as many shots as possible and fingers crossed...it's hard to reign in the excitement when you fear you'll never get another chance but as I say I'm trying to calm down a bit...by the way the shot of the warbler where you stood to get the yellow gorse is outstanding...
Steve Williams(non-registered)
Of the pictures of the Willow warbler, the one I prefer is the one with the yellow gorse and a bit of sky (or is it heather?) as a background. The background makes it just that bit more interesting as an image.
No comments posted.
Loading...
Subscribe
RSS
Recent Posts
Tawney Owls, New Garden setup, Lockdown Rules, Landscape photo and Reptiles on Dartmoor Coronavirus Covid 19, Lockdown period, Keeping busy Wildlife Photography wise, Time, Talks, Trials of Photographing Cuckoos and Wildlife Photography Subjects for 2020 The Good, The Bad, The Ugly and New 1 Day Wildlife Photography Workshops New ventures in the Field of Photography and Touring some of Scotland's Western Islands Building a Garden Pond, New Computers, Extra bits you might need & Practicing What I Preach Excuses Excuses Excuses and starting Wildlife Photography in your garden Red Squirrels in England, Jays, a Selfish Hobby, a Dartmoor Landscape photography project Learning from Photographers, Jen Bryant, Mark Sisson, Fieldfare, Redwings & Red Squirrels Retirement, Our Nature Reserve, Red Deer and My Ways of Getting Closer to the Wildlife
Keywords
wildlife photography camera Dartmoor Devon wildlife photography photos images photograph birds
Archive
January February March April May June July August September October November December
© Robin Stanbridge Photography
User Agreement
Cancel
Continue