I have lived on Dartmoor in Devon, England for two and a half years nowand seen three summers. The first one we had great weather, the second was not so good with a fair bit of rain. This third one has been great again. In the last ten weeks we have had about seven weeks of sunshine, a couple of weeks where it has been cloudy but still warm and about a week of rain. I was told not to go to Dartmoor because it is always raining. It’s like what they say about Wales. “If you can’t see Wales it is raining but if you can see Wales then it is just about to rain!” I have a sister who lives in Wales and she is always telling me how great the weather is. We had a ten days holiday there a few years ago and everyday was sunshine. Maybe that’s why we have to pay to cross the bridge to get into Wales (which I don’t understand). Then again you have to pay to cross the Tamar Estuary to get into Devon (which I DO understand). So the week continued with fantastic weather down here on Dartmoor. It was a blue sky with a few white fluffy clouds and it was hot, up to 25 degrees. The moor was covered with people on holiday and locals out for a walk. This would have been a problem for wildlife photographers to get somewhere quiet to get to do their photography and that is why I get up early and do mine, well before most people get up.

Having said this I was in for a surprise on Friday. I was up at 4:30am and I was out of the door before 5am with my dog and binoculars to see what I could find. The weather at home was exactly what I described above so I was looking forward to my walk. I drove to the Tor car park and as I was getting closer the weather started to change so much so that when I arrived I could not see over 20 metres as it was so foggy. This Tor is about 1.5 miles away from my house; it just goes to show how the weather conditions can change in such a short time on Dartmoor. I turned around and drove to another location down in the valley. When I got there the fog was not quite so thick so I parked up and started walking. Murphy, my dog, was not bothered about the weather it can be sunny, snowing or foggy as long as it is not raining and he is out, he does not care.

I was out for about three hours and during the first hour the fog was gradually thinning out so my last one and a half hours being out, was in glorious sunshine. The fog had disappeared from where I was walking but I could see, or not see, that the beautiful Devonshire town of Tavistock was still shrouded by the fog. Weather conditions still fascinate me, I used to take all the meteorological data at school, log it and try to predict the weather. It appears to be a bit easier nowadays with computers and satellites, but professionals still can’t get it right. Remember in 1987, what do you mean you were not born then, you will be telling me next you have never seen England win the World Cup in football! I digress. In 1987 a weather forecaster stated that, there was not going to be a hurricane, to a woman on TV and then during the night we had high winds and half the trees in southern England blew down, also caravans, cars and boats all over the place.

Whilst I was out I witnessed one of nature’s greatest sights and I really wish that I had a camera with me. I was walking along one side of a stone wall when I saw a group of about 20 Linnets flying from a small tree down to the grass, which was dry but had all the seed in their heads, on the other side of the wall. This was happening about 25 metres away from me. The linnets were landing on nearby weeds and reaching over to eat the seeds in the heads. Soon they were joined by others which gradually swelled the group to about 100 birds. Within this group were a few Goldfinches. Over the coming minutes more and more linnets kept joining this group flying from the tree to the grass and back again. After about 30 minutes this group had swelled to about 1,000 birds and I was so overawed with their presence being so close. When they landed in the tree it appeared that the tree was alive and when they flew to the grass there was a huge woosh of sound. I have witnessed Starling murmurations but never this close. I was just mesmerised by what was happening in front of me. I could have stayed and watched it for ages but my dog was getting fed up so, reluctantly, I moved on. I thought to myself that I will be back with my camera but it will have to be on Saturday because I had “jobs” to do at home.

On Saturday morning I dashed out early with my camera full of anticipation and went straight to where I had seen the linnets the day before. When I got there the scene was devastating for me and could not believe it. The farmer had cut and collected the grass and there was not a single linnet to be seen. I cannot tell you how disappointed and annoyed I was but at least I had witnessed it the day before.

So with my main aim thwarted and no plan in my head I just went walkabout with my camera equipment. Whilst on my walkabout I got some nice images of Meadow Pipits on gorse bushes and Yellowhammers sitting on green bracken which I think looked really good. 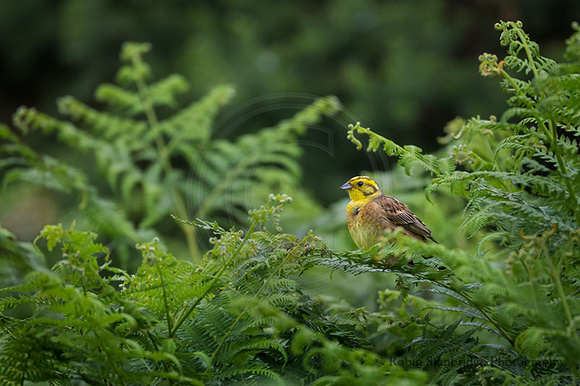 When I got back home my wife asked how I got on and I told her what I’d seen, her reply was “I should always take my camera” hindsight!!!!

Out early again on Sunday morning and the light was to die for. I searched around for Stonechats, especially the males with their black heads and their white, buff and red chests, in an area that has the sun lighting them up, so you see detail in their heads, and the bush they are on, but with the darkness of trees and the town of Tavistock behind. To me this really makes a nice image as it seems to make the bird really stand out. What do you think? 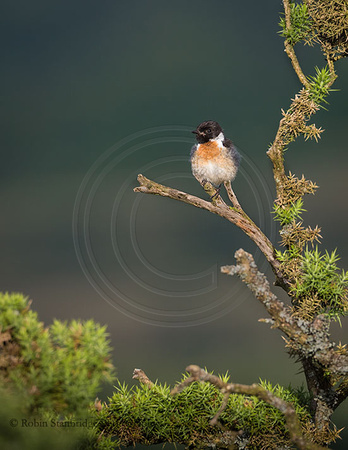 When I arrived home from work the other day I switched off the engine and I sat in the car watching a Wren hunting for food on our fence. Recently we fenced off an area of our garden for use by guests staying at our Bed and Breakfast at Acorn Lodge on Dartmoor ( www.acorn-lodge-dartmoor.co.uk ). Within the garden area we erected a summer house, again for guests use. It really is a Bed and Breakfast with a difference as it states on our website. With a normal Bed and Breakfast you get a room, usually small, and that’s it. Some B&B’s still want you out of the room by 10am and you are not allowed back in until about 4pm, not ours, because you get a key to the door and the whole lodge is yours for the length of your stay, even on single occupancy. So apart from a really good selection of breakfasts you get a choice of two Bedrooms, Shower room, Kitchen, Lounge, Dining / Study area, Private garden and a summer house. On top of that you also get a Devon cream tea on arrival. I’m married to the woman who prepares all that, so why don’t I ever get a cream tea!!! Anyway I digress. This wren was going around all the nooks and crannies where spiders and insects were. It amazes me how quick nature makes use of human interference on the land and it becomes part of their lives. Put a fence up, spiders will use it for their webs to catch their food. They in turn become food for the birds. Put a bridge up and birds will use it as a nesting sight. Build a house and although it is for the habitation of a human they are not the only ones that will be living there. So subconsciously every time we build something we are doing it for wildlife. Good hunting (with a camera).

If you enjoy reading my wildlife photography blogs and wish to be notified each time they are published then please click on the RSS link and subscribe - it is free. Thank you.