Last weekend I spent about six hours, three on Friday and the same on Saturday, out on Dartmoor in Devon trying to photograph Wrens. I already have, I believe, some good photos of wrens but you can never have enough. The weather was bright but cloudy on Friday and Saturday morning, just how I like it. In the early part of the year, April and May, wrens would be singing on top of bushes or small trees and if they were inside the bush you could still see them because of the lack of leaf cover. But this time of year there appears to be too much cover and they very rarely appear on top of the bushes. The bushes I was hoping to get them on were flowerless gorse bushes as the green and brown spines and the lichen make quite a nice image especially if branches surround the bird making a frame around it. I went out early and sat in amongst some bushes waiting for the birds to come to me, which they soon did. On a couple of occasions a wren would be singing in the bush I was sat next to but I still could not see it. In fact at one stage it was so close and its singing was so loud that it was really hurting my ears (I must remember my ear defenders next time). For the size of the bird it really bellows out its wonderful “drilling” song. 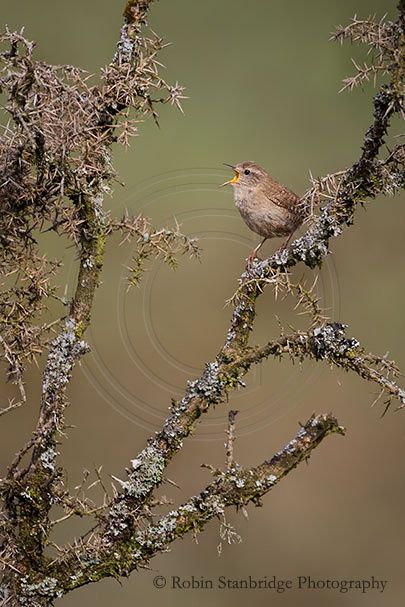 On previous occasions when I have been photographing wrens singing I have noticed, in my images, that they close their eyes when they bellow out the very high notes which seem to emphasise the effort they put into their song.

Other places I have lived there seemed to be very few wrens, but Dartmoor seems to have an abundance of them which is great. The effort I put in to photograph these birds was to no avail because I did not take one image over the two days.

My wife phoned me up at work on Thursday afternoon informing me that there were four or five juvenile wrens on our front steps being fed by their parents. By the time I finished work and got home they had gone. B****Y work getting in the way again!!!

I do quite a bit of research to write these wildlife photography tips in my blog, from reading, magazines and books and on the internet, to watching TV, honestly its work but enjoyable work. Most of the photography information I write is from my own knowledge and experience but at times I still check to confirm the information is up to date and correct. But I look for other related information and ideas to give me inspiration that I can write about which I feel that every true wildlife photographer should take an interest in. Just recently I was visiting National Trust properties not far from my home address. A lot of these properties have second hand book shops and at times are a treasure trove for people that, like me, like reading old books. My wife visits the main National Trust gift shop whilst I browse the book shop. On this occasion I found and bought a book titled "Nature Watch". This book was written by Trevor Beer MBE who is an Author, Wildlife artist, Naturalist and a Columnist who writes a very popular wildlife and countryside column in the Devon paper, Western Morning News. I've written down that he is an MBE but he has a string of letters, all nature related, after his name which would take up the rest of this Blog. He won, in 1979, the Gavin Maxwell Award for the conservation of Otters in the wild and the David Bellamy Award for conservation given by the British Naturalist's Association in 2001. He was also elected Wildlife Champion for North Devon Areas of Outstanding Natural Beauty in 2005. He has written numerous books and tourist guides, is a leading authority on big cats in Britain and has healed thousands of animals and wild birds. My only fault with him is why have I not heard about him before now and I can only put it down to the fact that his works all appear to be Devon related and mostly North Devon. I do not have a problem with this because I think it is a fantastic part of the country and full of nature's beauty, but I would have liked to have read his works before now.

On the cover of the book, which was written in 1998, it states that Trevor owns a fourteen acre private nature reserve which gives him the inspiration behind many of his articles and books. As you know I also have some land which I hope to turn into my private nature reserve but it is only six acres. I intend to use this land for my wildlife photography and it should give me inspiration to write articles for my blog.  Trevor’s book contains one hundred and fifty of his articles. I have only just started reading and already I'm thoroughly enjoying it. He seems to write about one or two subjects per article. The sad thing about this it that it just gets you hooked before he moves on to the next subject. The upside of this is that you are looking and wanting more, therefore I will just have to buy some of his books.

As you know I love all wildlife and I have picked up on one point the he makes. On page ten he states "We are strange creatures, usually waiting until a species becomes rare and has to fight for survival before specially protecting it, although we are beginning to wake up a bit." I feel that nearly twenty years later we still have not woken up a bit and nowhere near smelling the coffee. How long are we going to take to wake up? We are killing wildlife every minute of the day, some to eat but a lot just for so called sport, money or, the even harder to believe, because it is a tradition!!! Recently I watched a film about Puffins and Whales being killed for tradition and read that twenty five million birds a year are being killed in the Mediterranean area as they make their migratory journey of birds from Europe to Africa and it did make my blood boil. The saddest thing is that nothing can survive this continued slaughter and when the wildlife has all gone then what are they going to kill! I know I might be a bit selfish because I love wildlife photography and less wildlife makes my hobby harder. But surely a world without wildlife will be a very sad place. I could have a really good rant but this is just my view a not for a wildlife photography blog.

After reading quite a few of his musings in the book he has got me hooked. I love his style of writing and he makes me want to get out more to see, photograph and write about my own wildlife and nature experiences. I can't imagine ever drawing as well as he does because I can't even draw a matchstick man properly, one leg or arm is always longer than the other. But if I can learn from his writing then I'm hoping more people will become interested and enjoy my blogs. If you enjoy wildlife and nature I would urge you to look up Trevor Beer (http://www.trevorbeer-countrysidematters.co.uk/) and his articles in the Western Morning News on the Internet or one of his books and find the time to read them as they are thoroughly enjoyable.

I'm off to carry on reading this wonderful book by Trevor and let myself dream about the world he's writes about.